Taking a break for a very good reason

After a while, I am back with an update... In a couple of weeks I will be married, and the last few months have been occupied with work and wedding planning.

This is all to say that this blog will probably be updated only after the holidays. My fiancée likes board games but we still have to play miniature games to find out if she likes them. Maybe my posts will shift away from solo gaming?

Battle for Threnger: the supply rafts

This is the last linked game using MOTH for the 6x6 Challenge. After the misdirection and attack on the enemy control outpost, it is time for Platoon 24 of the League of Canlaster forces to strike on a sabotaged supply raft. However, as the enemy took back the outpost, they had time to warn nearby patrols to defend the raft. So now the ambush has turned on its head.

This is the board setup: Canlaster has two 5-soldier squads, while Yordan has two 6-soldier squads near the raft. To win, Canlaster must gain a 2:1 advantage on remaining forces or drive all enemy 4 inches away from the raft, while having some forces in contact with it. 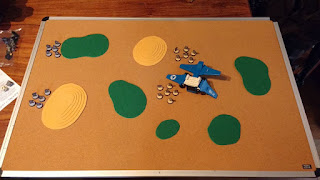 The Yordan forces, acting defensively, took positions on the hill and forest patch. The Canlaster forces also advanced through the patches of difficult terrain, to have some cover. Unfortunately, when the firefight began the Yordist fared better (in their damage rolls), nearly wiping one of the attacking squads. 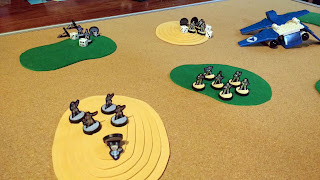 This allowed all of the enemy forces to focus on the remaining Canlaster squad, which did not survive much longer.

Conclusion
In the end, the League of Canlaster (i.e. my forces) won 2 out of 6 games. In my defense, I would say that the enemy forces had advantages in numbers and placement, to keep the games challenging. Of course, that is just to avoid looking so bad.

What about MOTH for solo play? It is, as expected, an upgraded version of USE ME. The adoption of d10s instead of d6s means there is more room to add modifiers to movement and fire, and thus, the feel of a more detailed game. There are also some ranged fire options (suppression shot, aimed shot and break shot.) Likewise, there is more detail in soldier weapons and armor.

With all that said, for my solo games I would keep USE ME, maybe adding the suppress shot option. One reason for this is lower level of detail feels a little quicker to play. Another reason is that I would have to keep playing MOTH with 15mm figures halving the measurements, whereas USE ME is already designed to play at 15mm scale. However, I would surely use the improved solo system from MOTH in those games.

Battle for Threnger: Defending the outpost

This is the fifth linked game of MOTH for the 6x6 Challenge. This time, Platoon 24 of Canlaster forces must hold the enemy outpost while attacked in two fronts. Since the previous game was successful, I decided to have both sides with equal numbers of soldiers. This is the board setup: 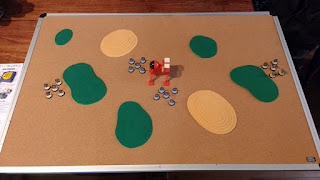 The League of Yordan forces on the right moved to fire at one of the Canlaster squads before they could get some cover. One soldier was badly wounded, and the squad leader decided to counter attack. 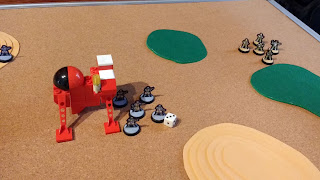 The attack was successful, as most of the Yordist squad was defeated while the Canlaster squad lost a single soldier and had another two wounded. 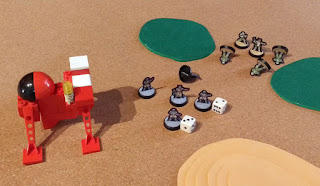 On the other side, Yordan and Canlaster squads were exchanging fire without many losses... until the Yordists decided to charge into melee. 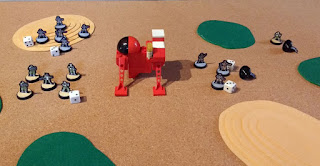 That was a bloodbath, nearly wiping out the second Canlaster squad. 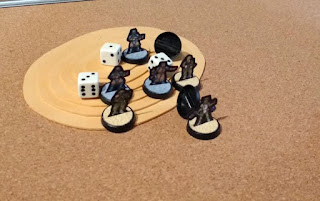 After this, the first Canlaster squad, which had some wounded soldiers, moved in, but were received by enemy fire. A couple rounds later, the League of Yordan advantage was enough that I decided the game was a loss.

Conclusion
The battle started well for the League of Canlaster, but some bad rolls on the melee between squads turned the tide against them. Overall, a fun game, and the result means the last battle will see some reinforcements for the Yordan defense.

My first regiments for Morale Napoleon

A brief interlude from the MOTH games: I have been putting together some figures in preparation to play Morale Napoleon. These are the results: 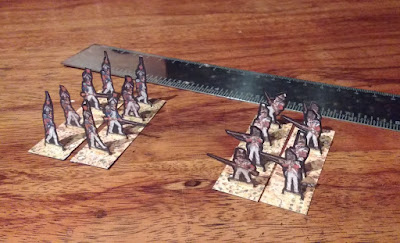 All the figures are from Walkerloo Print-Fantry. The ones on the left are from the "Les Grognards: Old Guard Grenadiers" set, while the ones on the right are from the "Coldstream Guards" set. All of them were printed at 30% scale, resulting in figures that are 15mm tall (from foot to eye level), then placed in sets of 4 on 60mm x 20mm bases -- the standard for infantry battalions in Morale Napoleon.

I still have to try a few battles in MapTool to get a better feel of how many more stands I will need to play the game.

This is the fourth out of six linked games of MOTH for the 6x6 Challenge. In this battle, Platoon 24 of the League of Canlaster must make a fighting retreat out of enemy territory, after making a diversionary attack. The platoon is represented by a force of 8 soldiers, being chased by two 5-soldier squads of the League of Yordan.

The goal of the Canlaster forces is to reach the left board edge with at least half the initial troops. The Yordists want to prevent that. The Canlaster and one of the Yordan squads have Elan 6, while the other Yordan squad has Elan 5. 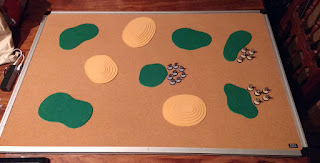 As the game began, Canlaster had the initiative and started to move away. At some point I thought, "hey, I could use an action to shoot at the enemy to slow them down, instead of just running." While it did allow me to take a couple of enemy soldiers down, this brilliant idea let the enemy get in close range. Close range means a bonus to hit and to damage, and suddenly five out of eight Canlaster soldiers were dead, and the game was over. 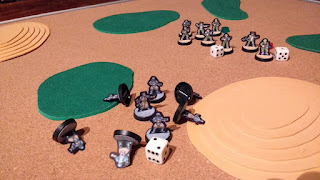 I kept playing just to try and escape with at least one soldier. But the Yordan forces kept chasing them and eventually, there was no one left. 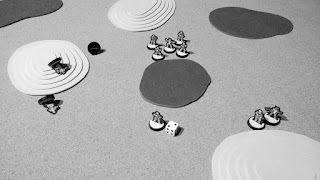 After the game, I noticed that I forgot to use the "suppress shot" action, which does not actually hurt enemies but grants a defensive bonus for moving troops. I guess if I had use that (or maybe simply run), the Canlaster troops might have escaped...

In any case, this concludes battle #4. In the next game, Platoon 31 will try to hold the control outpost they captured.
Postado por Ricardo Nakamura às 10:30 AM No comments: