This is the first match in the Circle of Death tournament. Grend is a former soldier from Seniira. A few years ago two villages in his nation were ravaged and a group of beastmen was found guilty. Some of them were gladiators and were set free as long as they kept out of Seniira. Grend wouldn't have that, so he turned to the arena to hunt them down. For now he's gaining fame to be able to have his revenge, and that's the reason for him to joining this tournament. He uses his soldier training with spear and shield to keep his foes away.

Mambul is a lion man, one of the many cursed beastmen of the realm. He worked as a mercenary until he found that he could gain more (with the same risks) as a gladiator. He is known for his cruelty, using a hand axe to slowly cut down his opponents and then finish them with a vicious bite. It is no surprise that the tournament masters would match him against Grend.

[Technically, both fighters have a rating of 9 but Grend barely makes it at 85 points while Mambul has 92 points. So I chose to play Grend. Note: I use the yellow die to mark the active gladiator and the orange die to mark the current attacker.]

The gates of the arena slid down, hitting the dusty ground with a thump. The two gladiators stood at opposite sides, facing each other. Grend tightened his grip on the spear and Mambul let out a roar that made the chatter of the audience turn into silence. The former soldier knew that feeling, the growing fear right before the charge. He had to keep it in check to come out alive. Mambul wouldn't make it easy, as he shouted, "You call yourself a monster hunter, but today you will be my prey!" and started a slow, prowling walk towards the center of the arena. 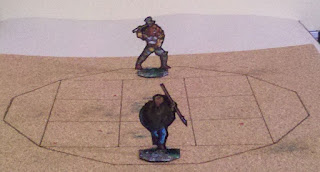 Grend rushed to the center, holding the spear low and his shield straight ahead -- a defensive posture. When he was a few feet away, Mambul pounced forward with his axe. Grend attempted a rising stab with his spear but the lion man deflected it and in a continuous motion slashed again. The man avoided the attack and closed in for another stab that glanced Mambul's armor. 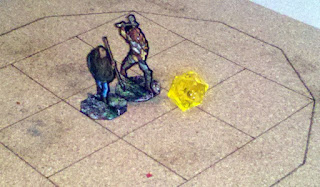 Mambul tried to maneuver around to avoid Grend's shield but the former soldier was used to those tactics. With the right timing, he tried another stab and hit the lion man in the chest, drawing blood. Mambul leaped back, eyes burning with anger, but Grend didn't seem afraid: he knew now that the beastman could be defeated if he could keep his defense up. 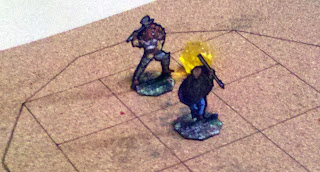 The lion man advanced again but Grend was better positioned. As Mambul retreated, the human managed to slash his left arm with a rising arc of the spear. 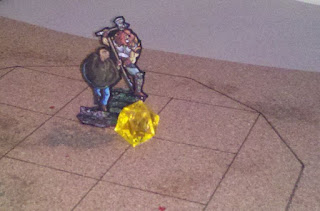 Grend was sweating and his heart was pounding. He could see that the lion man was also getting tired. The two gladiators moved left and right, measuring each other while trying to regain some strength. The moment Grend's gaze turned a little to the left, Mambul lunged but his attack was parried. Grend then drew the spear back and quickly stabbed the lion man's right forearm. Keeping his momentum, the man pushed Mambul against the arena wall and stabbed him in the chest again. As he prepared for another strike, the lion man rolled to his right to avoid being trapped. 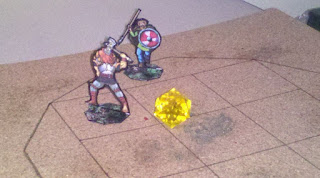 The former soldier then attempted to bash Mambul with his shield, to pin him again on the arena wall. However, the lion man moved quickly and hit with a counterstrike. He then lunged forward but Grend stepped to the side and struck him in the belly. Losing his balance, Mambul fell to the ground. 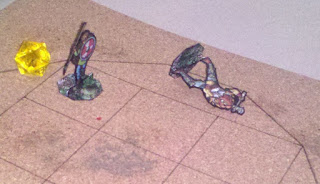 Feeling close to the victory, Grend slinged his shield on his back and grasped the spear with both hands, while Mambul struggled to his feet. The lion man advanced again and the two gladiators remained locked in combat for long seconds, parrying and dodging each other's attacks. Eventually Mambul managed to slash Grend in the stomach. The man leaped backwards and then charged again to surprise his opponent. The lion man dodged the attack and chopped on Grend's left arm as he passed. The impact caused him to stumble and fall. 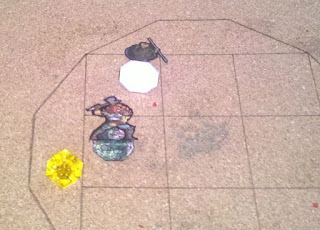 Scrambling around on the ground, Grend avoided the lion man's attack and got up. He then hit with a strong stab against Mambul's right arm, enough to make him stumble and fall on his back as he recoiled. 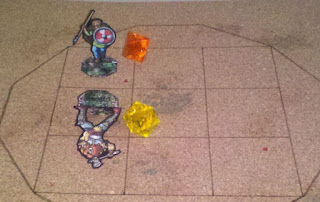 It was Grend's turn to attack his knocked down foe. The lion man crawled back on his elbows and deflected one stab but then Grend drove the spear deep into his chest, and the fight was over. 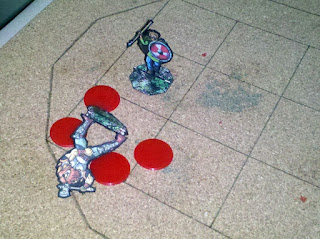 Whew, this was one long fight, taking a total of 14 turns. Grend's "wary" signature helped him avoid Mambul's "vicious" signature, otherwise he would be in deep trouble. The dice didn't help the lion man either: when Grend took a wound to the belly, I was rolling four dice for damage -- enough for a bleeding wound. On the other hand, Mambul's armor caused the human to slowly nibble his way to a killing stroke.

Grend succeeded on the recovery roll so he healed the three wounds he had during this fight. Now he will fight against the winner of the match between Black Talon and Mad Ramos.